by Matt Giovanisci | Last Updated: April 15, 2019 You agree to get emails from me, Matt Giovanisci. I'll respect your privacy and unsubscribe any time.

My rule for conducting a Money Lab challenge is it must have a tight deadline with the goal of making money. Experiments, on the other hand, can be ongoing and don’t have to make money directly. However, the point of this particular experiment is to make money.

This experiment is to increase revenue on an existing SaaS product simply by giving it a total makeover.

Currently, the product in question sees around 50-75 visitors a day to its sales page. And that’s the only page available to non-buyers.

We are not going to touch this variable.

Instead, we’re going to change the brand name, redesign the sales page, and introduce tiered pricing as quickly as possible and measure the results.

Here is the final result:

Andrew Fiebert and I started a new corporation for our first SaaS product. It’s called Lasso Analytics, Inc. I’m a 30% owner while Andrew holds the rest.

We’re developing an affiliate marketing product called Lasso (you can read more about it here).

We recently had a discussion on how we could earn more money with our current businesses. The Lasso project is running smoothly and has been an overall pleasant experience. Which led me to suggest that we create more software products.

We don’t have an audience problem. We are SEO people that understand what it takes to build traffic. Together, we have six websites/brands that get a significant amount of traffic.

However, most of those sites make their money through affiliate marketing. In order to diversify, we need to develop our own products.

So we agreed to try turning Lasso Analytics, Inc. into a multi-software production company.

And while we’re busy putting the final touches on Lasso (with the help of our small team of developers), we decided to take on a new, existing small project to test this idea. My very own WordPress plugin that lets you add, manage, and display your affiliate links from any program, including Amazon. Increase conversions. Find new affiliate link opportunities. Earn more revenue! Less than 5 minutes to set up.

Start Your Free Trial Learn More
Matt Giovanisci (me) earns a commission if you click this link and make a purchase at no additional cost to you. 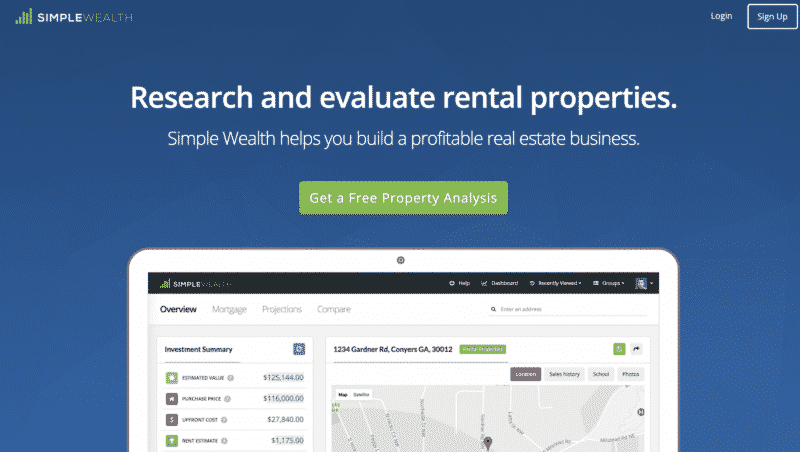 It started as an itch scratcher. Andrew wanted to buy some rental properties but couldn’t find a tool to help him analyze if they were worth it or not. So he built one. And it took him only six months to create.

He launched it to his massive audience at Listen Money Matters and made some sales. But once the initial excitement died, so did the product. Well not entirely.

The product currently earns about $1,000 a month. Not bad, but stagnate. It has a steady churn rate of about 7%, but no real growth in the last year or two. 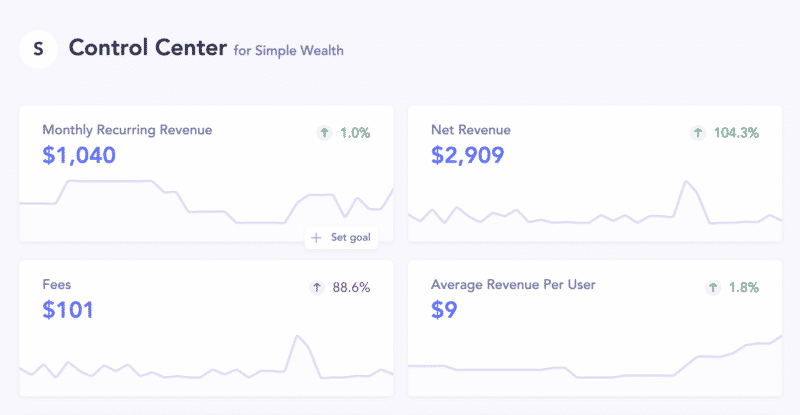 When he first showed me Simple Wealth a few years ago, I was impressed and he was excited. Even though I only have one rental property (which I hate), I still understood its potential.

So I pitched this idea…

What if I helped increase sales on this existing SaaS product? What if we moved this product under the Lasso Analytics corporation so I become a part owner to shake things up and see what happens?

“Interesting,” he said. “But I don’t want to spend a lot of time changing everything just to see a small uptick in sales. What are THREE things you think we could change quickly to turn this product around?”

I came up with those three things:

Andrew agreed. But in order to test our hypothesis, we’re only implementing the first and second action steps over the next few days.

I woke up on Saturday morning with my brain operating a full branding mode. This happens a lot. I like to spend time getting the brand name right.

I make sure the name is clear, easy to say, easy to spell, and makes sense.

When I come up with brand names, my favorite tool is Thesaurus.com. Here was my process:

Since this is a serious research tool, I wanted to stay away from cute or funny names. I also wanted it to sound more like a SaaS product.

Here is my list of words I came up with in Apple Notes that morning before getting out of bed. 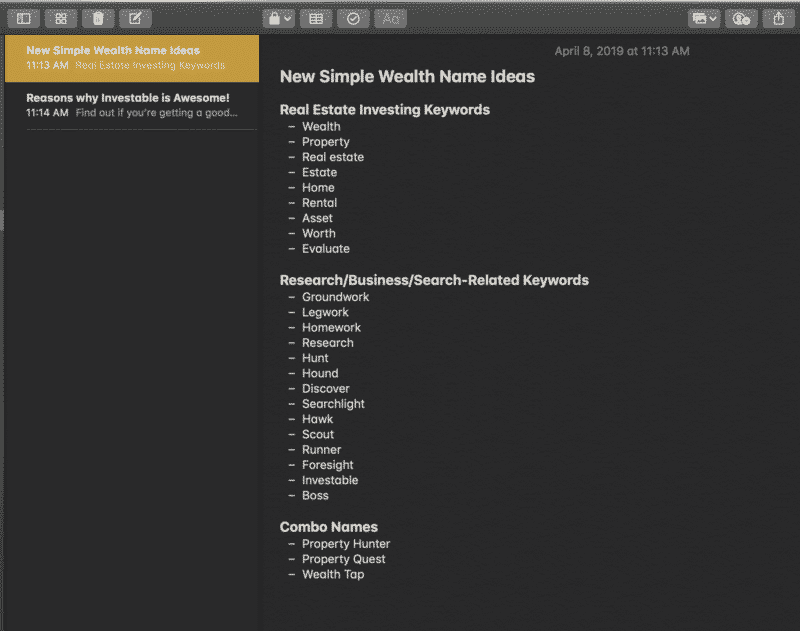 Steph and I walked to a farmer’s marketing that morning for breakfast and I started pitching her names. The ones I liked were:

Steph immediately liked Investable. It was the best name, but I was afraid someone had used it already. When I got home to research, it turns out no one does…anymore.

So I decided to run with it and start designing a logo.

I always start with a font. I used Google Fonts to find one. I chose six to work with:

From there, I opened Adobe XD to quickly mock up the font on a background. I decided to just stick with the original gradient that Andrew chose for the background of the sales page. 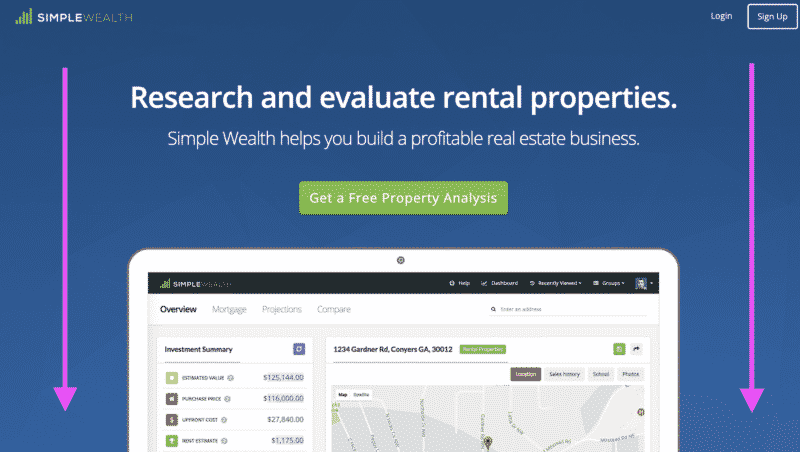 I really liked the way the Cabin font looked in lower case. But I didn’t like that the dot over the “i” was square. So I changed it to a circle. Now it was time to create an icon to go next to the font. Since the word “Investable” doesn’t entirely scream, “RENTAL PROPERTY RESEARCH!” I wanted the icon to represent a property in some way. But not entirely obvious.

Simple Wealth uses Google Maps to show property locations, and I thought it would be cool to shape the icon like a GPS pin. And since I wanted this to be a professional and hip SaaS product, I decided to use a gradient.

I started with just the GPS pin and gradient. Then I added a house roof inside and a chimney. The dot over the chimney represents the “i” in Investable. Simple.

Together with the new landing page design in Adobe XD, it looks like this: 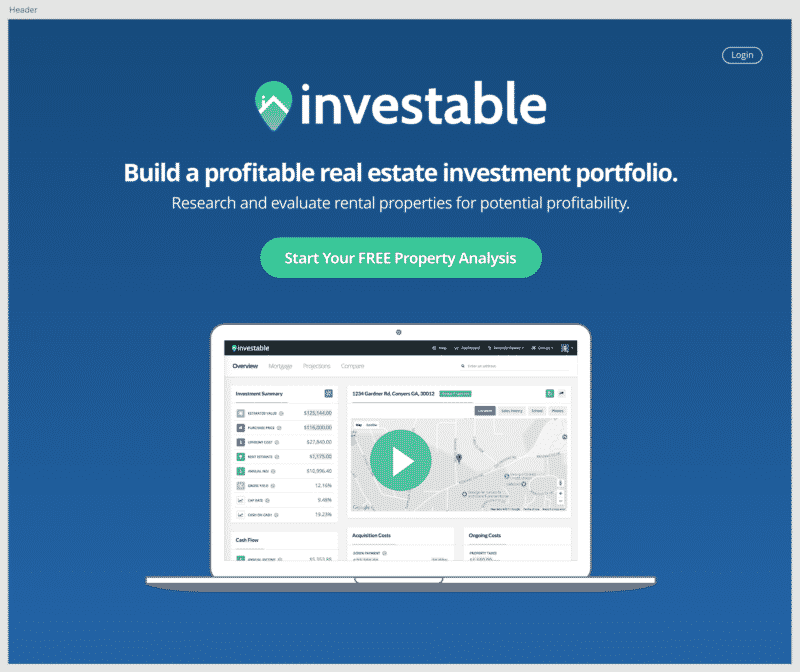 The main feature box at the top of the website. Include a pop-up video demo. 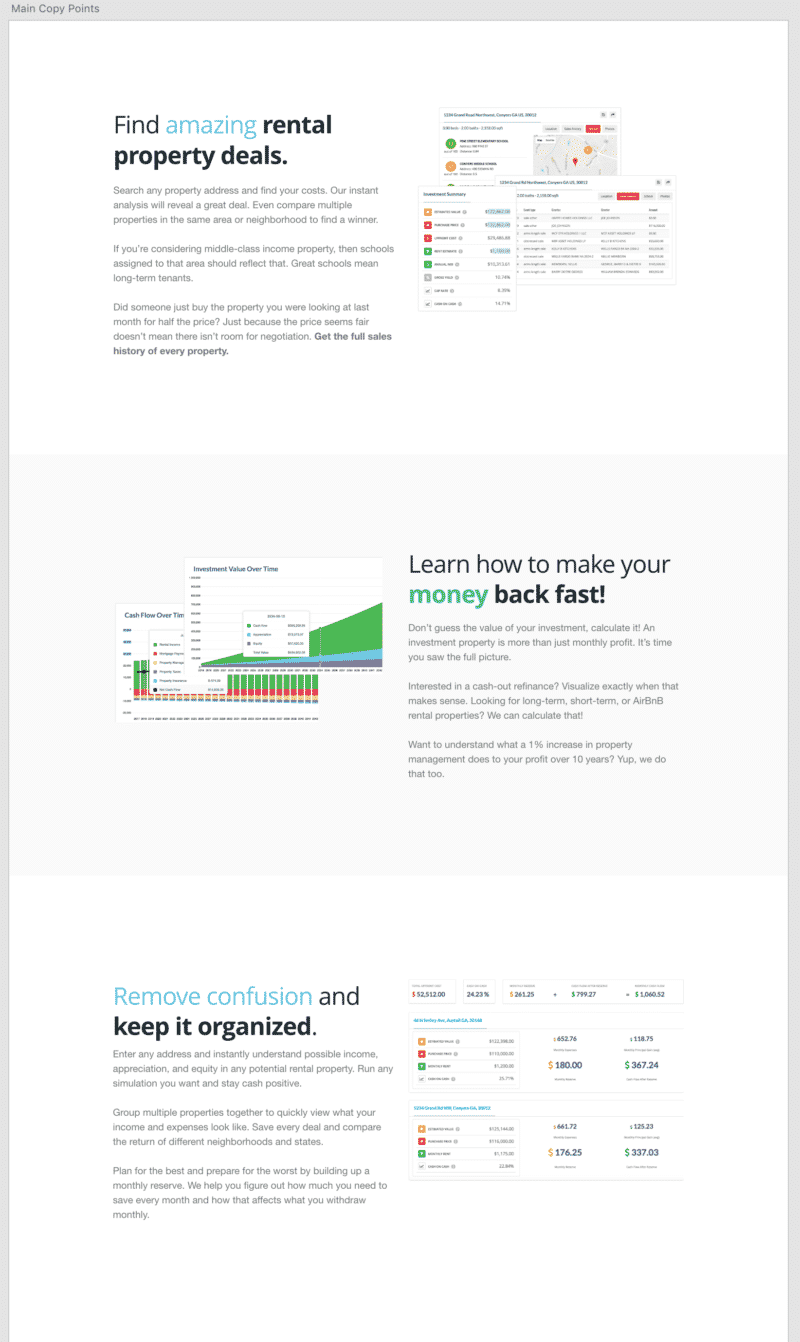 Taken from Andrew’s original copy with some slight changes to highlight three main benefits to the product. 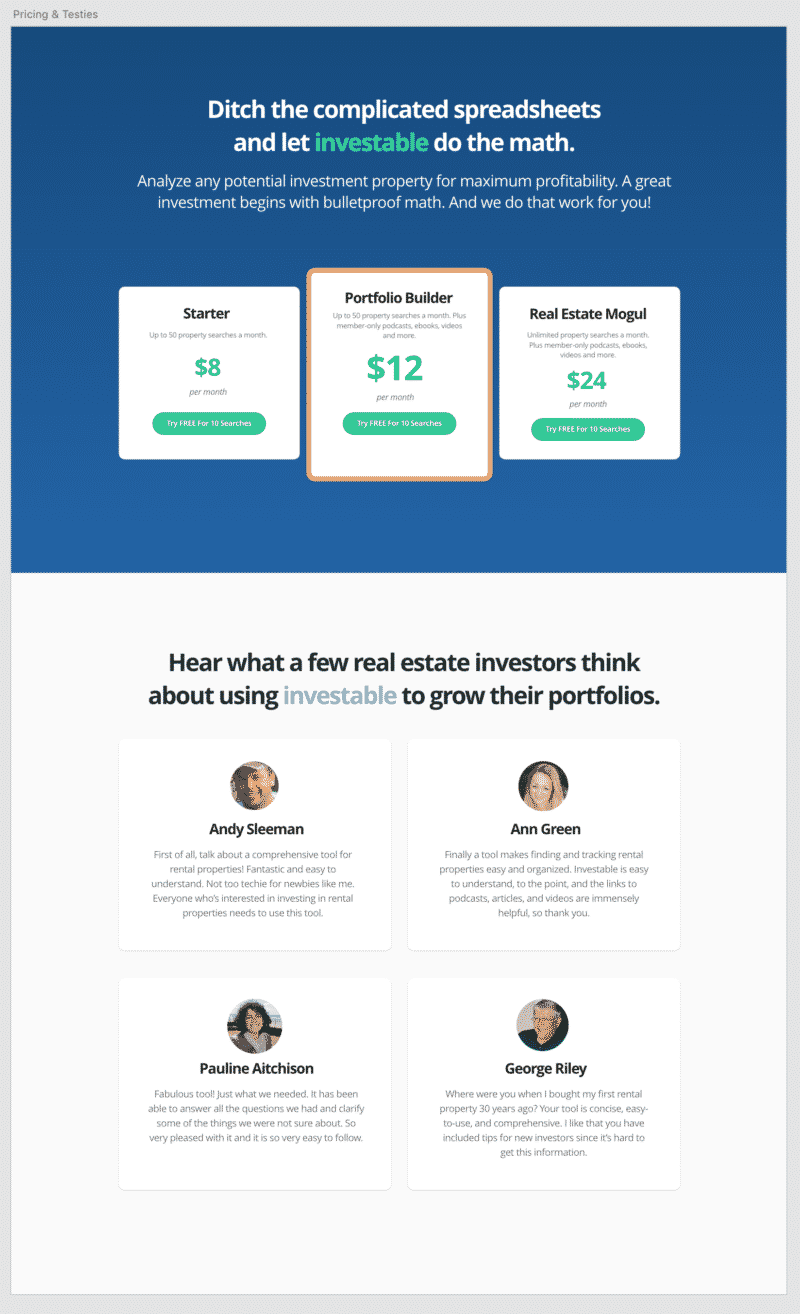 A new tiered pricing area (total guesses, may not actually be the final pricing) plus a testimonial area that I’ll hide on the site until we have real ones. 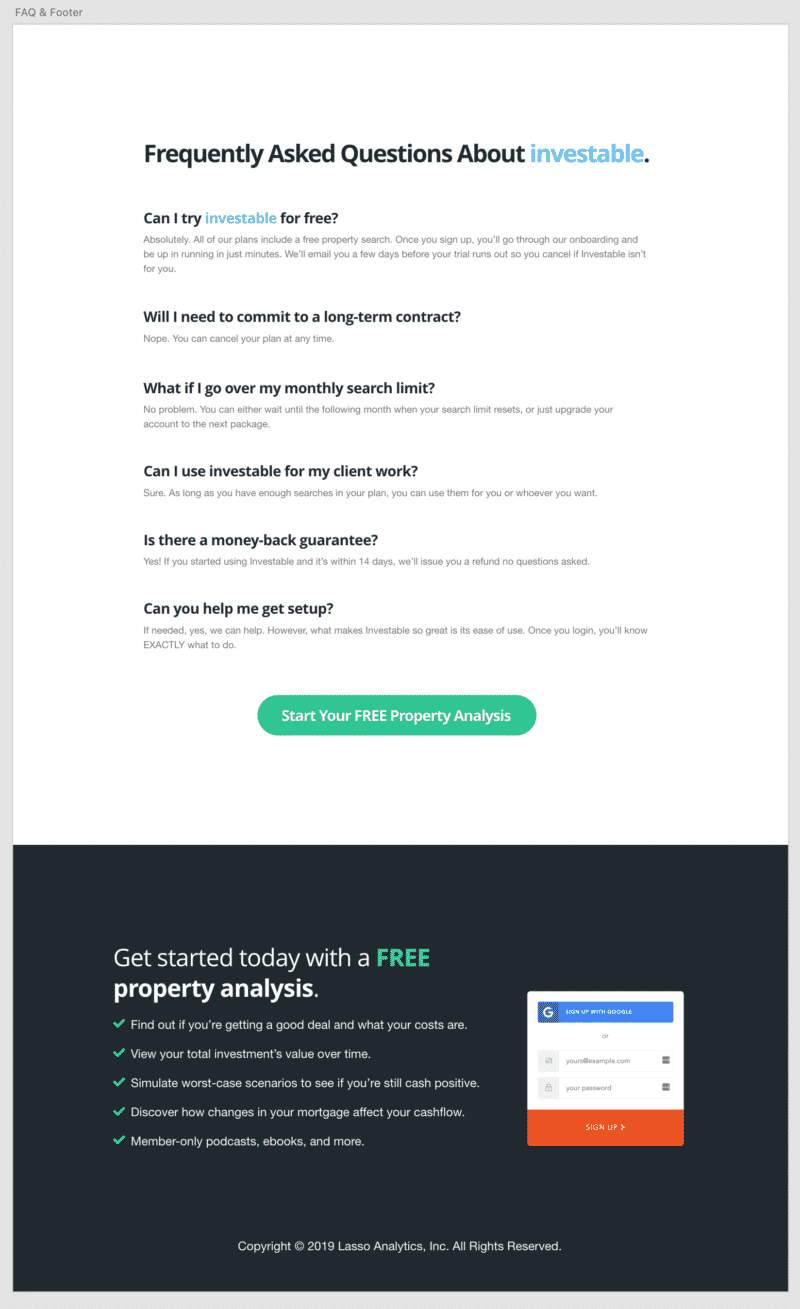 I sent my XD mockups to Andrew via iMessage. The next morning, he got back to me. Simple Wealth is coded in Python. This is a language I’ve never written in before. But I’m not afraid of diving into a new coding language (this previous challenge proves that).

Andrew set me up with my own local staging environment, which took me about an hour and a half to get started. But once I had it running, then it took the rest of the day to code.

Anyone can try the product for free. You get just one property search to see how it works. After that, you have to pay.

Andrew pointed out that a lot of current customers tend to purchase the annual $96 plan over the $14/mo plan. So in order to keep this variable, we each new pricing tier available with an annual discount.

I coded a toggle that switches the pricing view.

We jumped on Skype to hash out the remaining tasks in the makeover. The biggest tasks remaining are creating a sales demo video (which Andrew and I are shooting on day four) and implementing the pricing with Stripe.

After that, it should be ready to publish to the public.

As I mentioned before, we’re going to see if this makeover increases revenue. I have a feeling that the sales video and pricing will be the major factors.

Andrew had a little snafu with the pricing update.

Simple Wealth was using an older Stripe API, so it took some time to implement the new API with the new pricing. That held up video recording a bit.

But he got it done and we recorded the sales video the following day.

I asked Andrew if he could walk me through how he uses the software. I thought the sales video would be better coming from him since he built the damn thing.

We set up eCamm Call Recorder on Skype and recorded his screen while he explained the software to me.

I took that video and edited down to the final sales video entirely in screenflow 8 for Mac.

After showing the video to Andrew, he thought it was too long and boring for a sales video. Plus the quality was low because eCamm can only record video in 720p and I scaled it up to 1080.

I agreed, but it was still a good video. So we’re going to use it as part of our help center.

It was clear I needed to film the video myself to increase the quality and punchiness. So the next day, I watched the video several times and wrote out a script.

It took me 20 minutes to film. I made a fuck-load of mistakes. But I finally got it all down.

The editing, however, was a bitch! I took 20 minutes of footage/voiceover and edited down to 4:30. The goal was to get all the same info under five minutes. Mission accomplished.

I did all the editing and animations in ScreenFlow which took me four hours after filming. Then, I decided to create a logo animation for the beginning which I didn’t do for the first video.

For that, I use Adobe After Effects. I kept it pretty simple.

I took the logo animation and exported ScreenFlow footage and imported it into Adobe Premiere to put it all together. This was the final product.

Now, we wait. We’re just going to collect data over the next several weeks. We’ll keep an eye on customer service, traffic, and conversions. Hopefully, I’ll be able to report some good news with the rebrand.

I don't have a shitty checklist to offer. Just enjoy an email once in a while.

You agree to get emails from me, Matt Giovanisci. I'll respect your privacy and unsubscribe any time.