I Launched a Business-Focused Podcast Because Why Not?

For years I’ve debated doing another podcast. I ran a successful one in 2014 that’s still going and extremely popular. Can I do it again? Who the fuck knows!?

Here’s what I do know:

Why? Because I want more people to trust me enough to buy my products and think I’m cool 😎

I love this site. I enjoy writing and running experiments. My only problem is traffic. Sure, it gets some traffic that converts into subscribers/fans, but it pretty much averages only 50 new visitors a day.

The image above is all the traffic MoneyLab.co got since it was born in February 2016.

It’s hard to find this site. Most of my audience came during that early spike when my email page went viral.

Money Lab has no SEO game. I’m aware of the irony being that I have a course on SEO and all my other sites have way more traffic.

Since I started it, the only source of consistent traffic has been word-of-mouth, which I’m proud of. But instead of implementing an SEO strategy on Money Lab to gain fans, I want to try podcasting.

2. I Want a Consistent Publishing Schedule For Myself

Why? Because some days I’m bored. And I want another consistent creative outlet.

I run a digital media company with four websites (including this one). I have an Editor-in-Chief who manages a team of writers, a graphic artist, and a VA. My job is to make sure the websites are working, products are being created and sold, and putting out fires.

The good news is, my EiC is amazing so there are no fires. Products are being sold and the websites are running smoothly. So instead, I spend most of my time monitoring traffic, coming up with ideas, and driving myself fucking crazy.

I need to not do that anymore. This podcast will be a good place to live and keep me sane.

3. I Want to Connect With More Like-Minded People

When I go to conferences and events, I want to hang out with cool people like me who do what I do. And the more friends I make, the more help I can get promoting Money Lab without feeling like a douche nugget.

Warning: In the next paragraph, I’m about to name drop…

I was invited to the first Podcast Movement conference in Dallas, Texas where I performed an original song about podcasting on stage at The House of Blues (here’s a video).

I also performed another original song (here’s a video) at the 2014 FinCon conference (for personal finance bloggers) in New Orleans where I met Stephanie.

Suffice it to say I need to start podcasting again because everything good in my life has spawned from it.

Nerd Alert: When I was in high school, I was in the PA (Public Announcement) club. I read the morning announcements once a week. I joined because I was obsessed with radio and wanted to be a professional broadcaster.

During my senior year, I signed up for another club that sent us to CBS/KYW studios in Philadelphia to learn broadcasting.

Our final project was to write an NPR style story and deliver it on the air (AM radio, no big deal). I wrote a story about my local diner because that’s where I spent every single day of my life that year.

In other words, I have a knack for radio. Not just from my mild training and audio production skills, but also my ability to talk to anyone about anything. (And possibly my fear of “dead air”).

A podcasting course from Pete McPherson of DoYouEvenBlog.com.

Buy Now Learn More
Matt Giovanisci (me) earns a commission if you click this link and make a purchase at no additional cost to you.

…giving up too soon. I’ve done this with every podcast I’ve ever started.

My first show was a 15-episode comedy podcast called The Arctic Fox back in 2006. My friends and I started it for another friend who was fighting in Afganistan. We just bullshitted about local news and wrote comedy bits.

Then, I hosted a podcast for SwimUniversity.com about pool and hot tub maintenance. That only lasted 15 episodes before I realized no one cared.

After that, I started Listen Money Matters with my friend (and biz partner at the time) Andrew Fiebert. That one really took off! But after 246 daily episodes, I left because of a falling out with Andrew about the direction of the business. We’re good now, but that was a rough period.

I was craving another podcast to do a few years after that, so I started one called Driven. It was a long-form entrepreneur interview show that only lasted for eight episodes. I gave up because I completely lost interest in the interview process. It felt unnatural and inauthentic.

So here I am starting another podcast and I’m afraid I’m going to lose interest and give up. But I had an idea to help prevent that.

Create a Podcast For Yourself

I wrote a massive article about promoting a podcast years ago that’s still shared to this day. It’s a distilled version of everything I learned from running the Listen Money Matters podcast.

The very first point is: Don’t Define Your Audience. Define Yourself!

I make a point that “every successful podcast is self-serving.” Meaning, as a podcast producer, you should make a show that you yourself would enjoy listening to. Not only that, but enjoy making as well.

My friend Jason Moore called me just to say how much he loves Money Lab. He expressed that he wanted me to do more with the brand; to really take it to the next level.

I agreed. And during our conversation, I kept bringing up this idea of starting a podcast. But I told him I was afraid to start it because of my fear of giving up.

He said, “how can you create a hack so that you avoid hating it in the future?”

Boom! That was the fucking ticket!

A while ago, I had an idea for a podcast where people interviewed me on every episode. Basically, just flipping the normal podcasting format. But I knew that wouldn’t work.

However, I wanted to build off of that idea. I started riffing things that would make a podcast more fun and it started with me saying, “I enjoy being a guest on other people’s podcasts.”

Putting it all together, I landed on a solid podcast format.

A show where a series of new hosts (and special guest: Matt Giovanisci) talk candidly about online business.

Is The Gimmick Worth The Effort?

The idea of flipping the format is a gimmick. It’s to get people to pay attention to the show. But once people get past that, what’s the point?

Most of the show will just be two or more people talking about business and money. And just like this site, we will not teach anything. Instead, we’ll voice our opinions and how we practice business in our own ways.

It’ll be a “behind-the-scenes” business podcast. In other words, I don’t want to talk at you. That would make it less fun. It should be a business show disguised as entertainment. Something you could listen to casually even if you don’t run your own business or want to.

If this is the case, why the gimmick? Let’s test it out!

I told my friend Zachary Sexton about the idea and he immediately understood the concept. We jumped on Zoom and recorded the first episode. We talked about writing.

Once I edited the podcast, I realized a few things that would make this a difficult show to produce:

The good news is, the conversation part of the show we recorded came out pretty good. So I know that the meat of the show will work. But the gimmick is not worth the effort.

My assumption is, once people get past the gimmick a few times, it’ll get old. Like who cares about the gimmick?

So I’m not going to reinvent the wheel. Just make a really great wheel that’s better than everyone else’s.

My Plan to Craft a Great Business Podcast

I’ve tested out multiple business podcasts formats. Most of them didn’t work. Mainly because I was trying really hard to do something different. But trying to be different isn’t always better, I think.

Instead, I’m relying on the fact that I’m already different and I don’t have to fuck with the show format.

I made the cover artwork for this podcast last year when I originally talked about starting it. It was pretty simple to make because I already had the photo taken. The photo I used was from a shoot I did for the rap album.

Jason Zook suggested I flip myself upside to standout in a sea of podcast art. Can you find which one is mine? 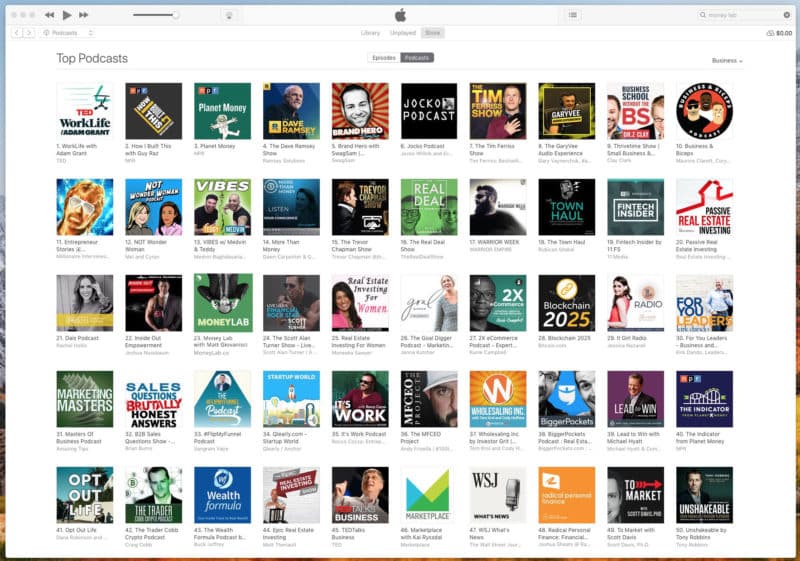 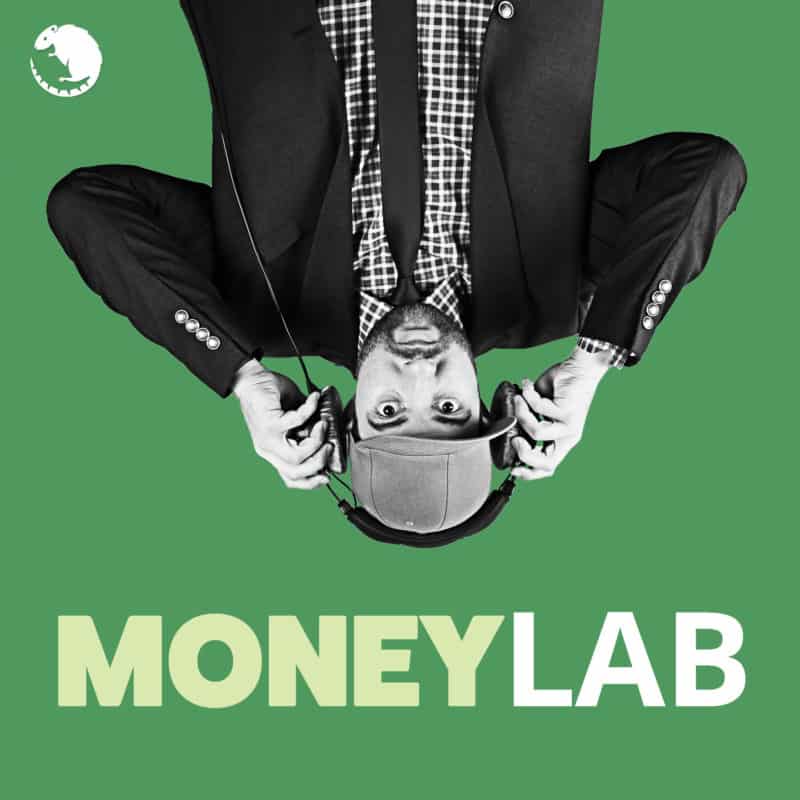 I feel like I’ve used them all. I’ve hosted podcasts on LibSyn/Blubrry (horrible interface), SoundCloud (clunky as all fuck for podcasts), and self-hosted (living nightmare).

My friend (and first guest) Thomas Frank recommended SimpleCast, which I was going to go with. But I posted about my upcoming podcast and Justin Jackson reached out to me on Facebook.

He’s currently starting up a podcast hosting company called Transistor.fm and invited me to be a beta user for a discounted price. Usually, I would say how much I’m paying, but because Justin offered me a special secret discount, I don’t wanna share just yet.

It’s a pretty simple interface, but it’s clean and that’s what counts. Here are a few screenshots:

My buddy Thomas Frank lives 30 minutes up the road from me and I invited him over to be my first guest. We talked about making videos for YouTube since he’s a successful YouTuber with over a million subscribers.

Thomas and I have been friends for about four years since I started Listen Money Matters with Andrew. He was one of our first real fans. Sidenote: he later took my position as co-host on that show and continues to co-host to this day!

The episode is about one hour long, and that’s what I want all the shows to be. We went a little long, but it’s cool because it’s the first episode.

It only took 3 hours for iTunes to approve the new show. And it’s now live and ready to be listened to. There’s only one episode so far and I’m publishing new episodes every Monday morning from here on out.

I might even throw in some bonus episodes on Thursdays 😉

Right now, it’s only on iTunes. So click here to subscribe! It’s still pending review on Google Play. If you listen to podcasts on another platform, Tweet me and I’ll add it.

Also, after you listen, please leave an honest review (bonus points for humor). And click here to see the new podcast landing page on this site.